Where the heck did the weekend go?! I could have sworn it was just Friday, and now it’s already Sunday night? Whaaaaat? I know they say that time flies when you’re having fun, and all, but honestly… this weekend was pretty uneventful. Aside from the thing-that-shall-not-be-named that happened on Friday night, I really didn’t do much this weekend that would explain the hyper-accelerated (geek alert!) passage of time. In fact, the most notable thing about the past few days was probably my appetite…

Now, my appetite is usually pretty wild, but with how it’s been acting lately, you’d think I haven’t eaten anything in a week or more. And just for the record, I have. Many, many things in fact…

… which I’m going to randomly insert throughout this post… 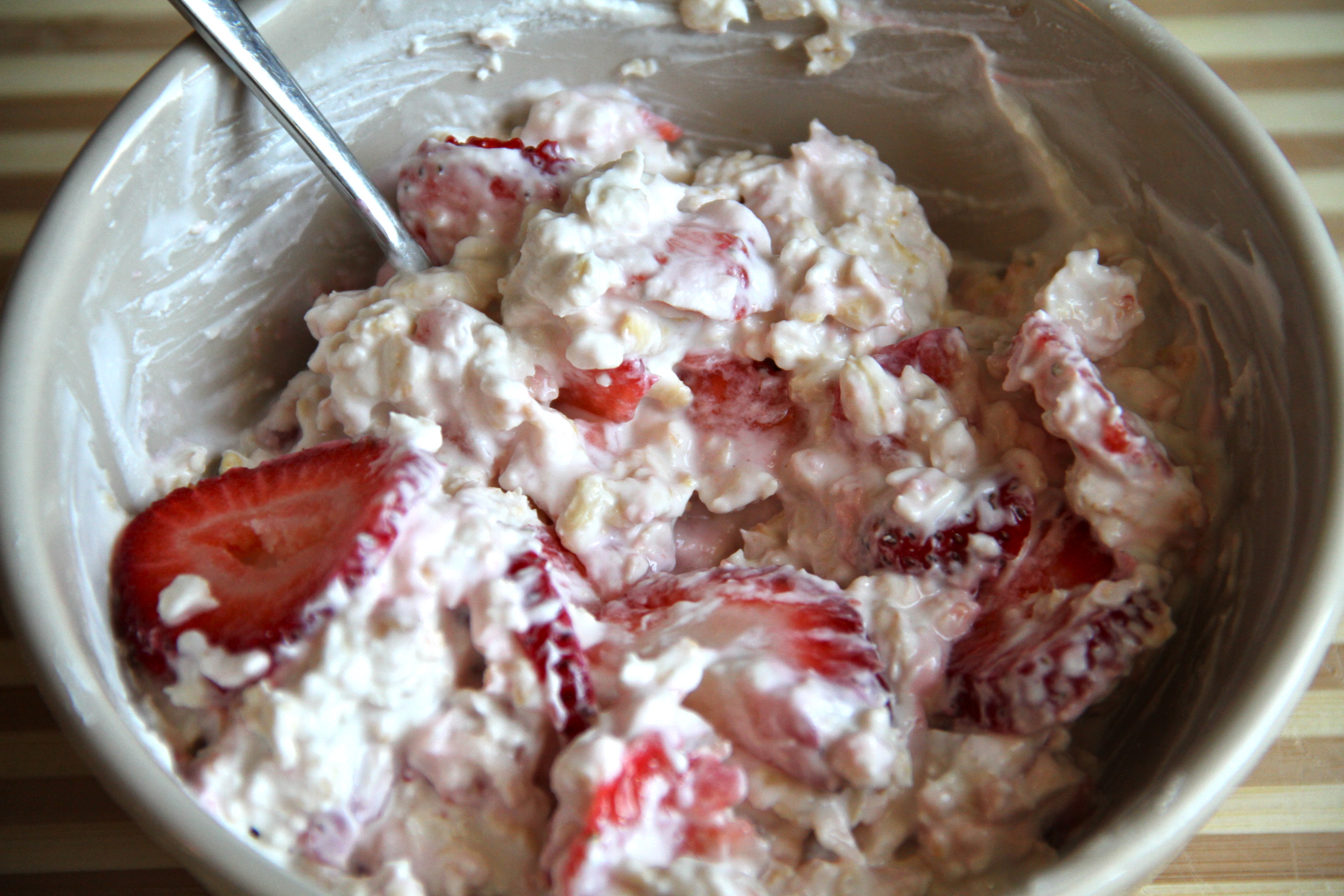 I don’t eat overnight oats very often, but once in a blue moon, a craving will hit and I’ll whip up a batch for breakfast… and then remember why I don’t eat them very often. Not a big fan.

… so I apologize in advance if things get a bit confusing…

Anyways. Let’s talk about hunger. Who here enjoys being hungry? Anyone? I can’t honestly say that I do; in fact, I downright hate it. And that shouldn’t come as much of a surprise considering the rocky relationship that I’ve had with it in the past. I’m not going to go into too much detail about what went on between the two of us, because I’m not a kiss-and-tell kind of girl, but suffice to say that hunger was constantly trying to get my attention, and I was constantly ignoring him. Yeah, I was a … meanie. 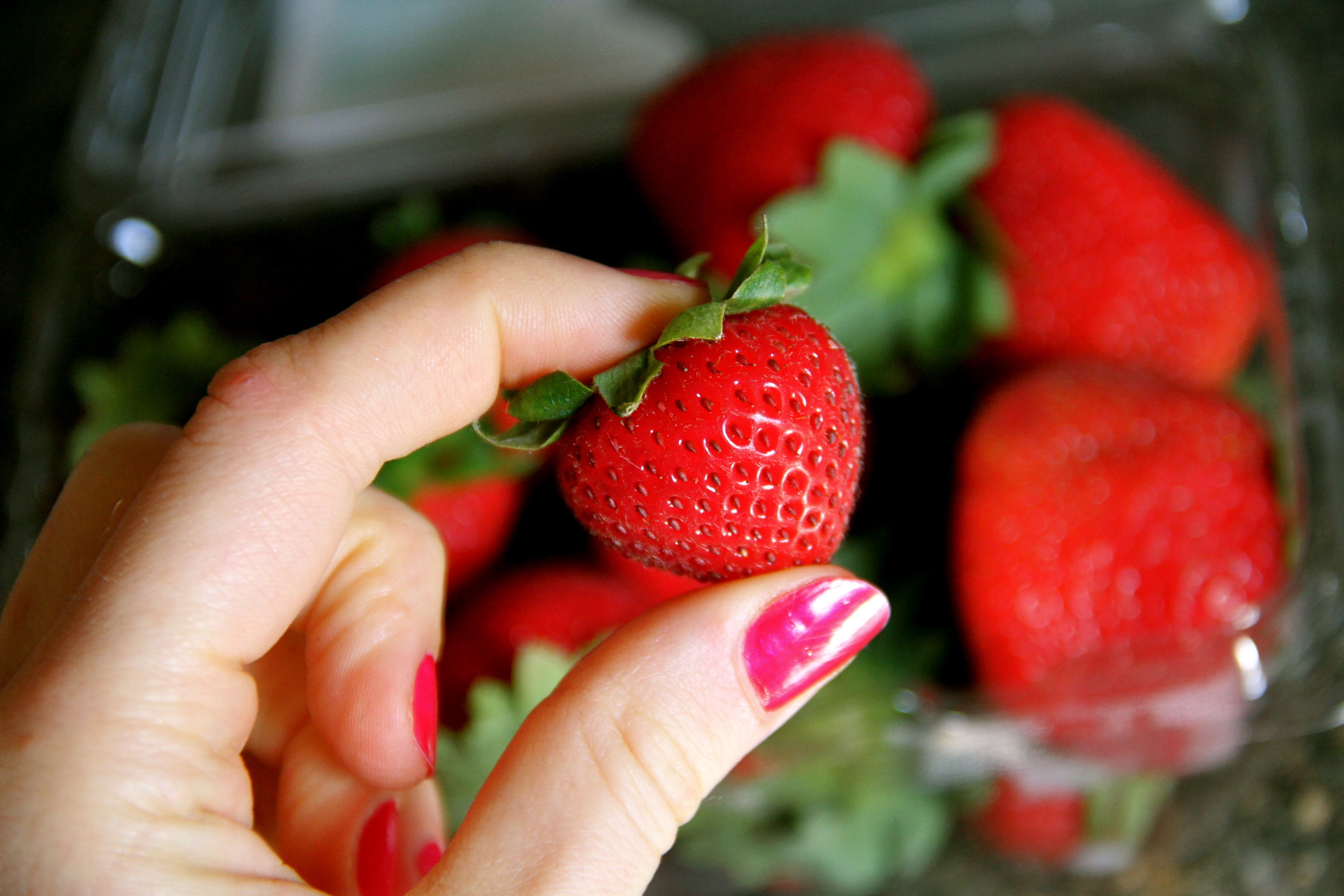 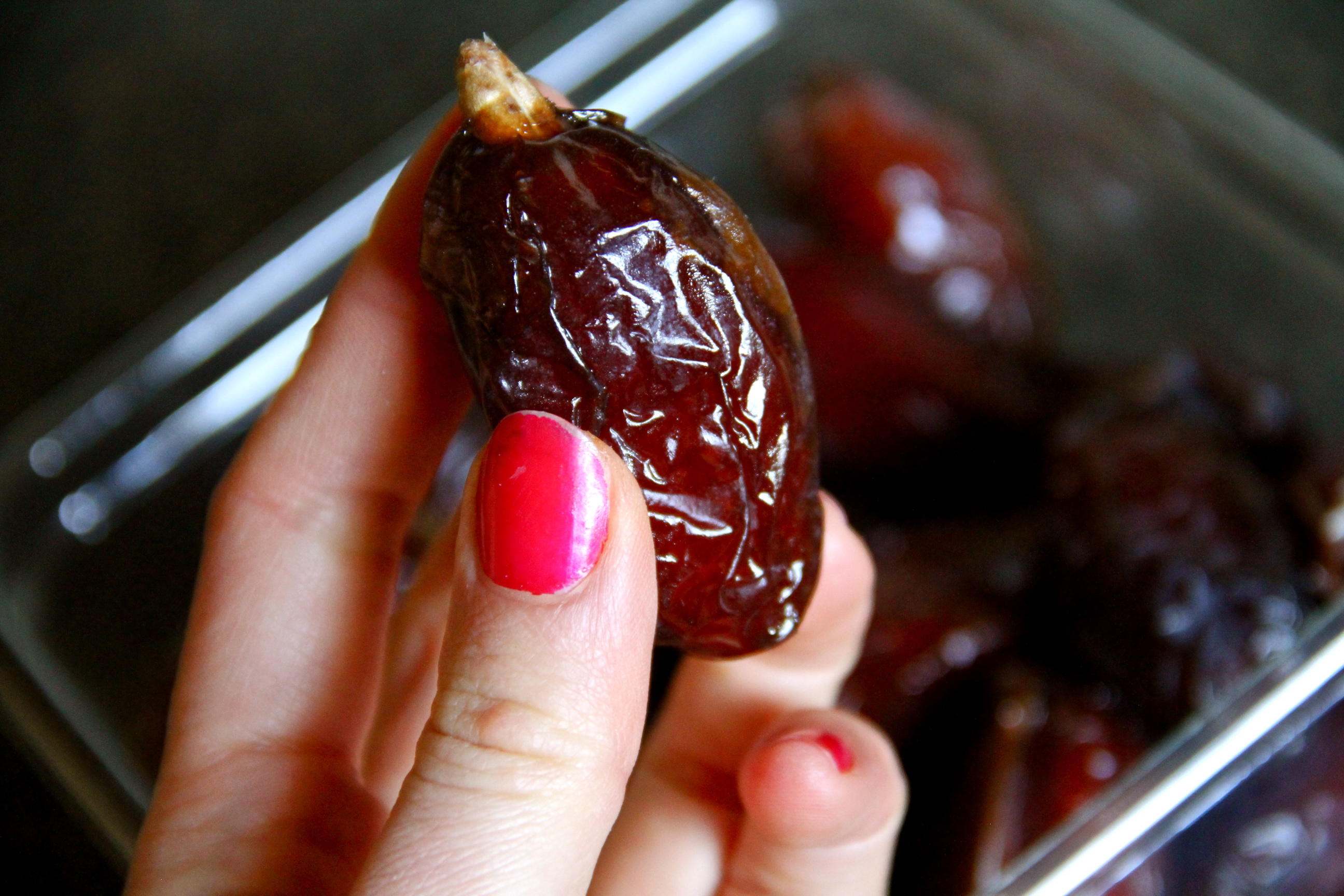 Eating my weight in fresh strawberries and ridiculously juicy dates.

Given my history, I probably don’t need to tell you that I haven’t always been very good at honoring my hunger. Actually, let’s not sugarcoat it – I downright sucked at honoring my hunger. It got to the point where I wasn’t even able to feel hunger anymore because my body figured that I must be mentally retarded for constantly ignoring it, so it stopped wasting it’s time trying to talk to me. Ouch.

But really, it was stupid of me to ignore my hunger and force myself to endure the misery that comes with it. No energy. No motivation. No focus. No happiness. No spark. No life. And the worst part is that I did it to myself. I ignored hunger, yet hunger consumed me – I couldn’t do anything but watch the clock and fantasize about what my next meal was going to be… which isn’t a very interesting way to live. 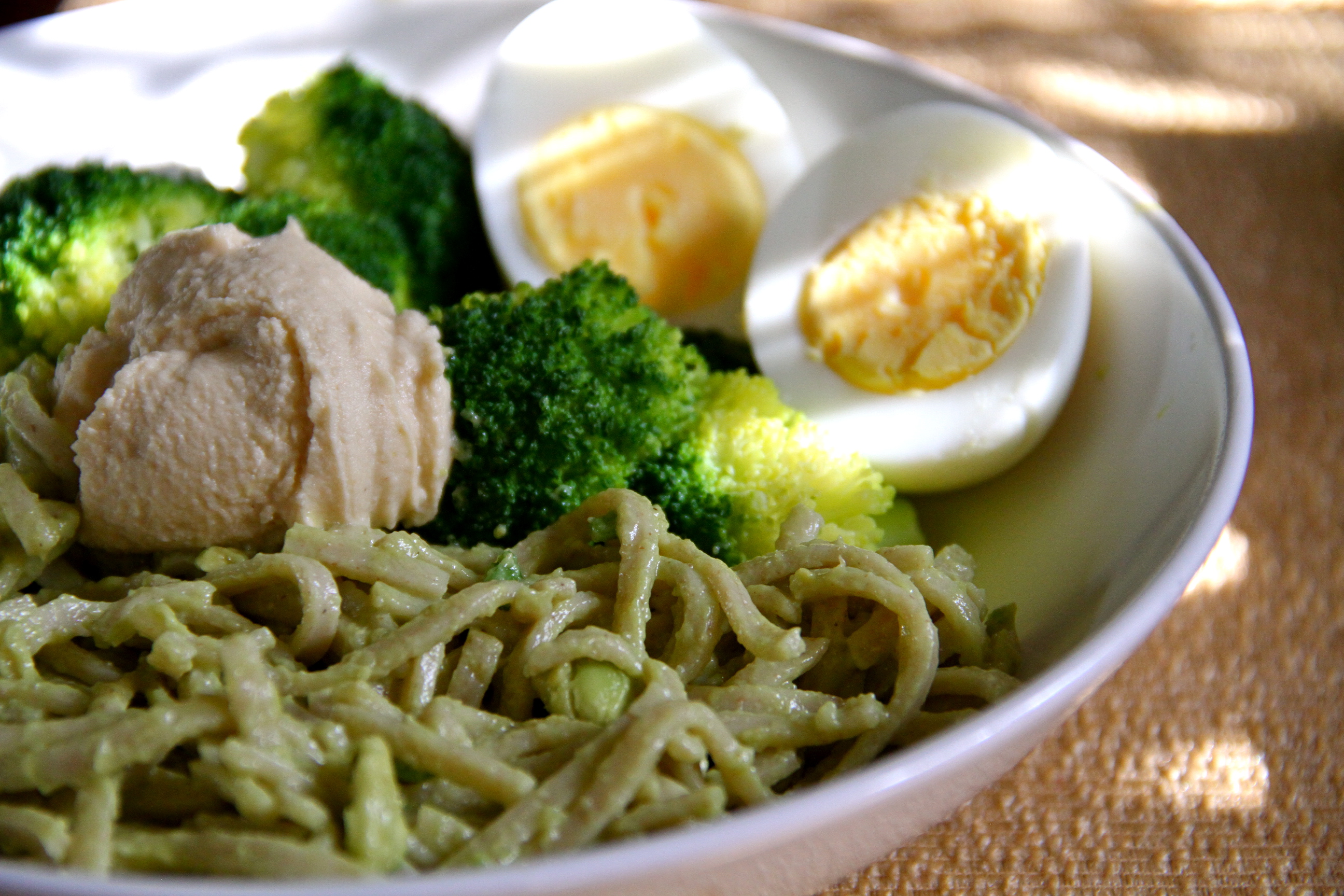 But that was what my life consisted of for a long, long time. Constant hunger, specified “meal times”, and just trying to get through every moment in between. Good times. Except, not really. But I needed to feel that control. I was afraid that if I gave in to my hunger, and ate when I wasn’t “supposed” to, that I would never stop eating. The very thought of losing control was enough to make me stick to only eating when I was “allowed” to, while forcing myself to endure the hell that came along with constantly being hungry.

Until I just couldn’t do it anymore. 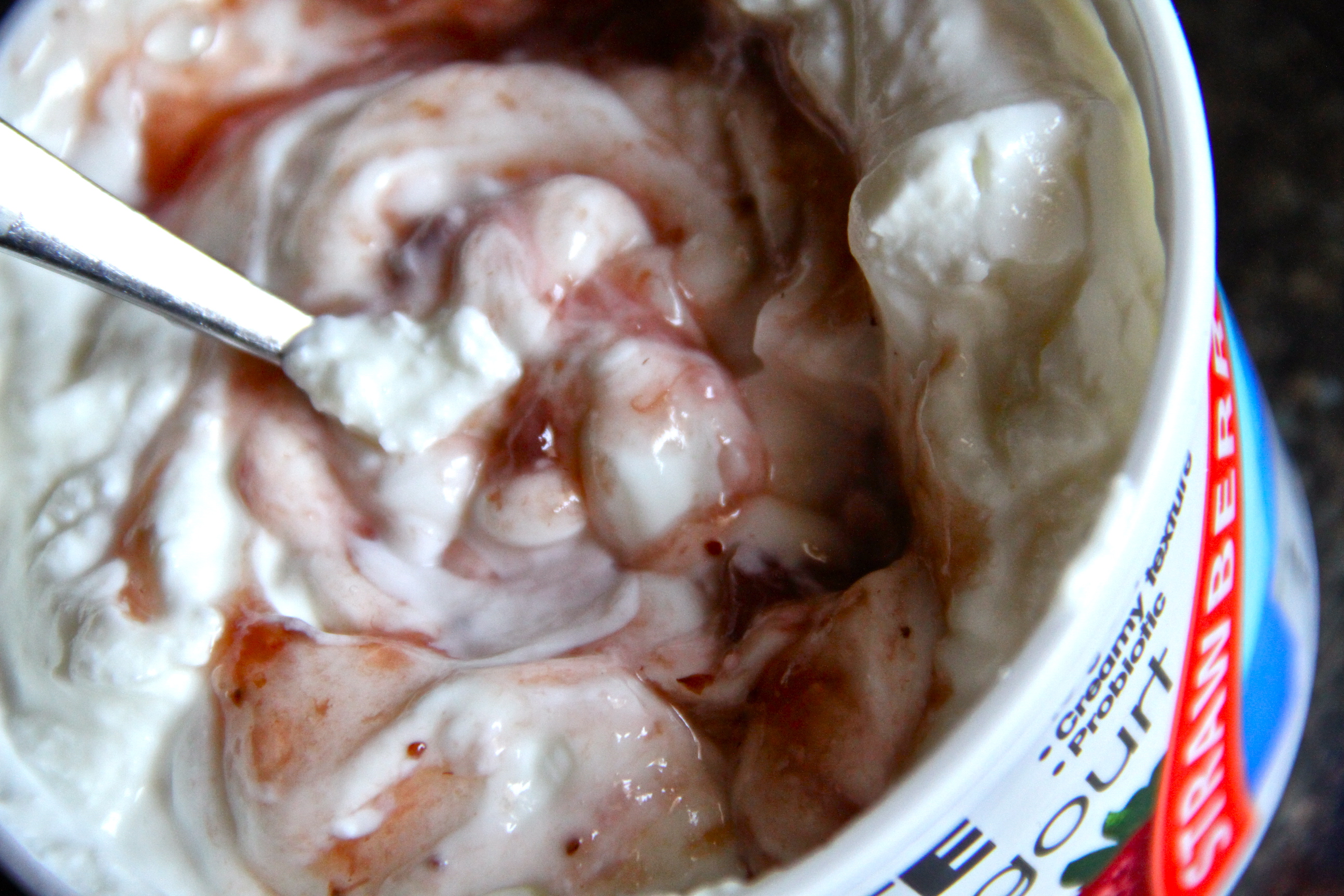 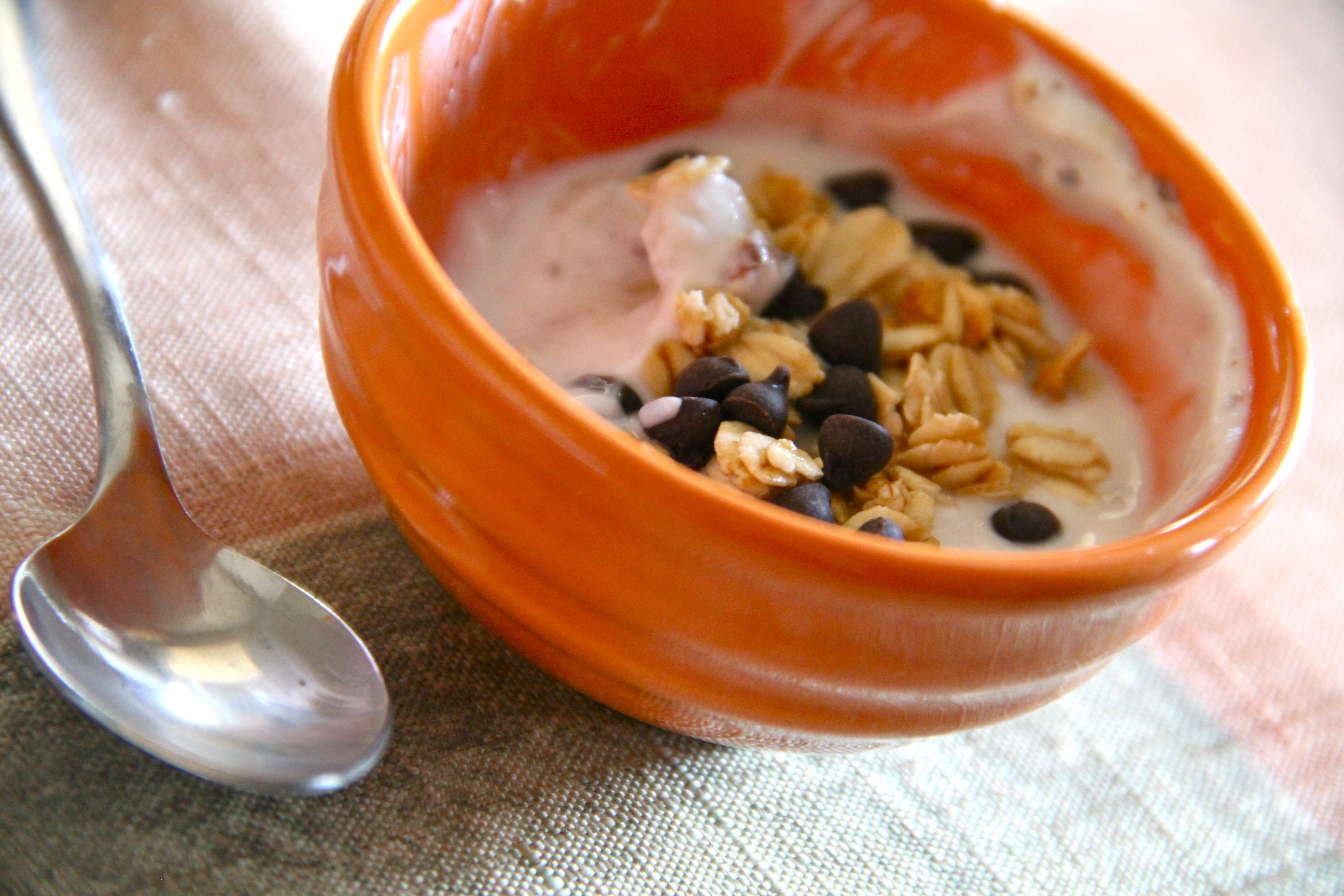 Non-colonized strawberry Greek yogurt provided the base for many chocolate granola messes.

I don’t know exactly what happened, but I got fed up. I was tired of feeling like … crap all the time, and what made it even worse was that I knew I was doing it to myself. So I eased up on some of the control and began to let my body call the shots; and while I make it sound like it was no big deal, that was anything but the case. It was impossibly hard, impossibly terrifying, and worth every last struggle.

Although I did experience considerable amounts of anxiety and mental discomfort as I was learning to trust my body, because I was just waiting for it to screw me over, I also experienced considerably less fatigue, fuzziness, moodiness, unhappiness, and food obsession. I learned that I could make myself feel infinitely better by just giving my body food when it asked for it, and that was the control-breaker…

I fell in love with feeling good. 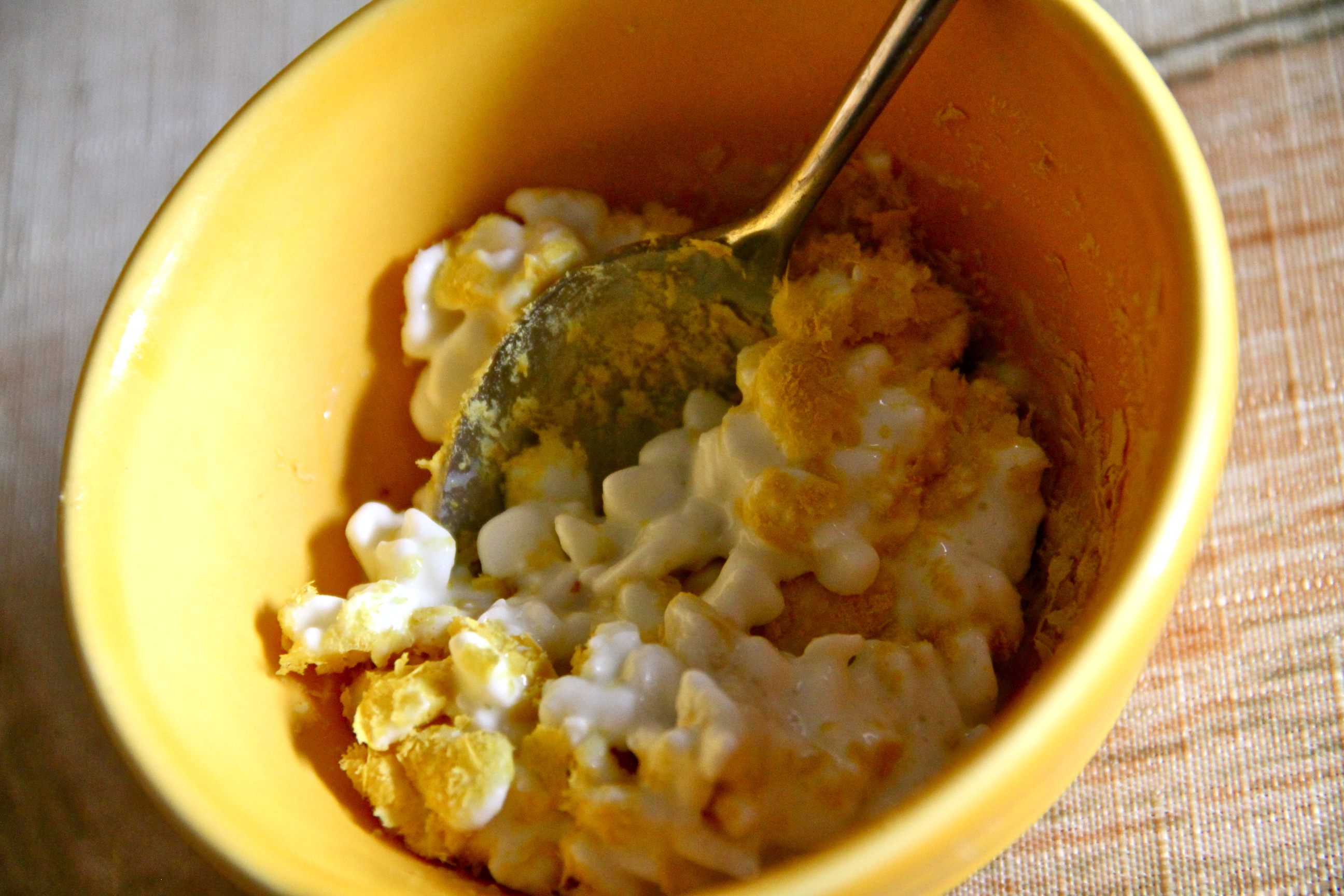 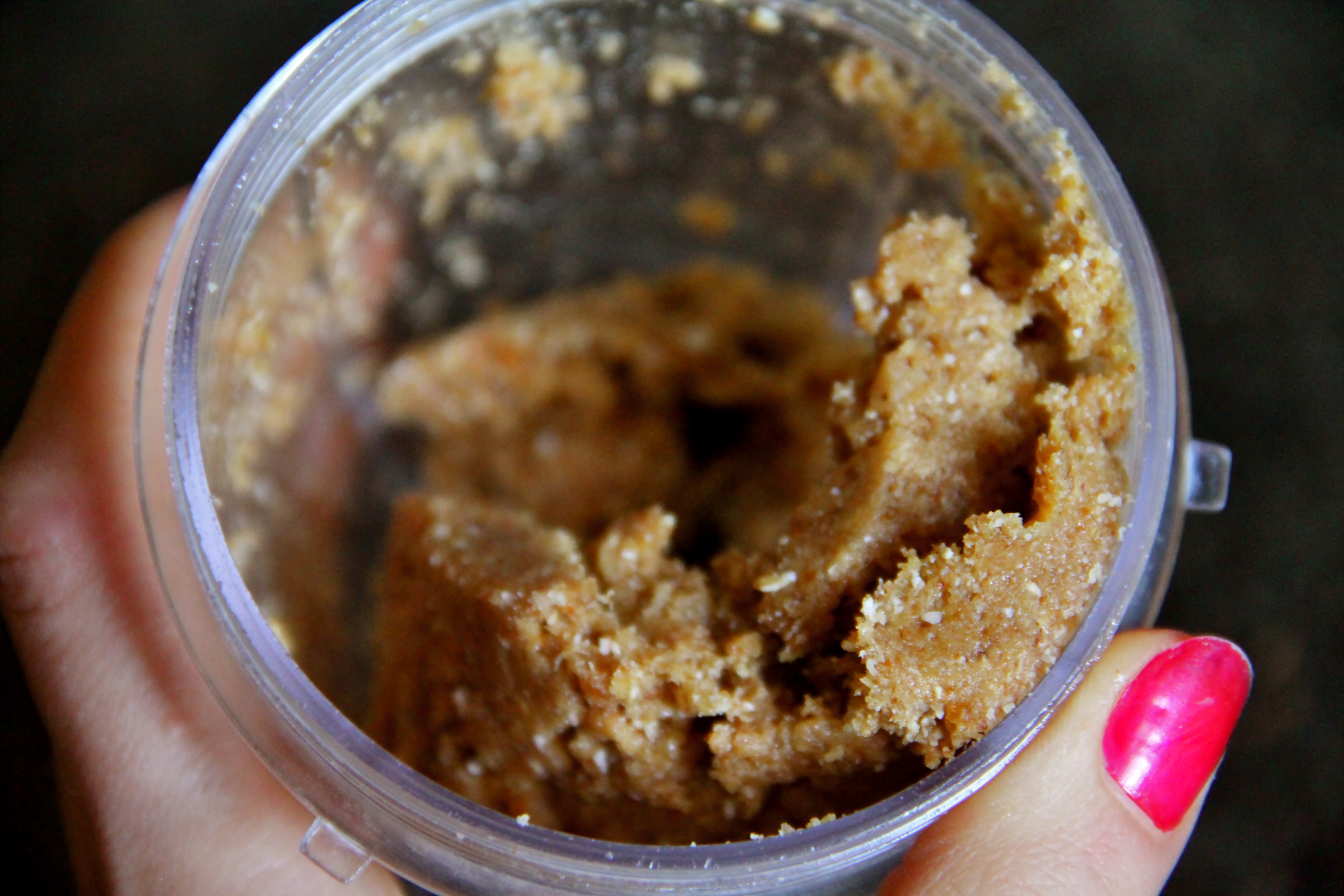 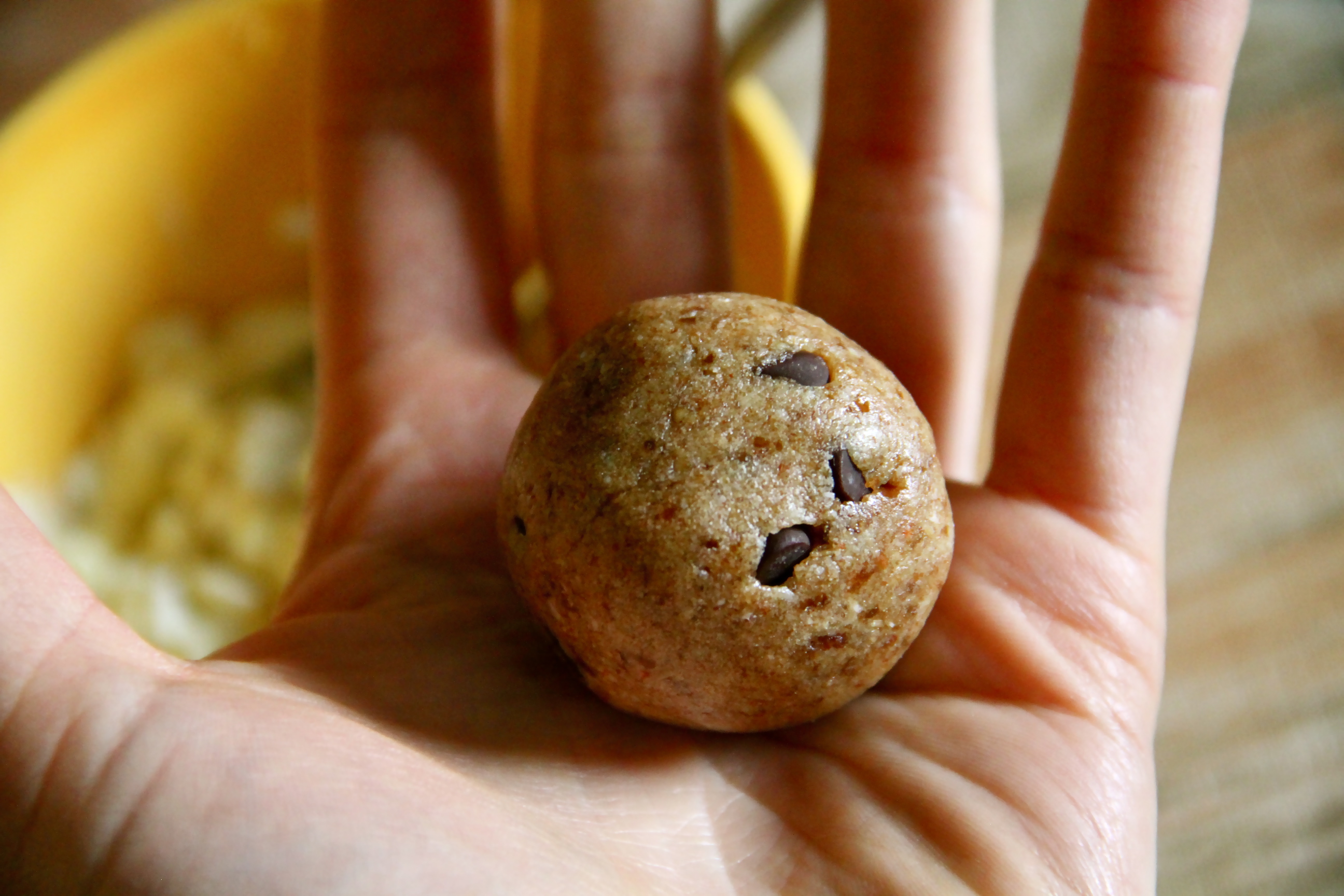 These days, I like to think that I’ve gotten pretty good at honoring my hunger, which is probably why I nibble so much… I still get hit by the occasional disordered thought that tries to tell me that I can last “just a little bit longer” without eating, but I quickly change my tune as soon as I start to experience the nasty side effects of hunger; I just can’t deal with them anymore after having lived with them for so long.

Nothing is worth that kind of misery. 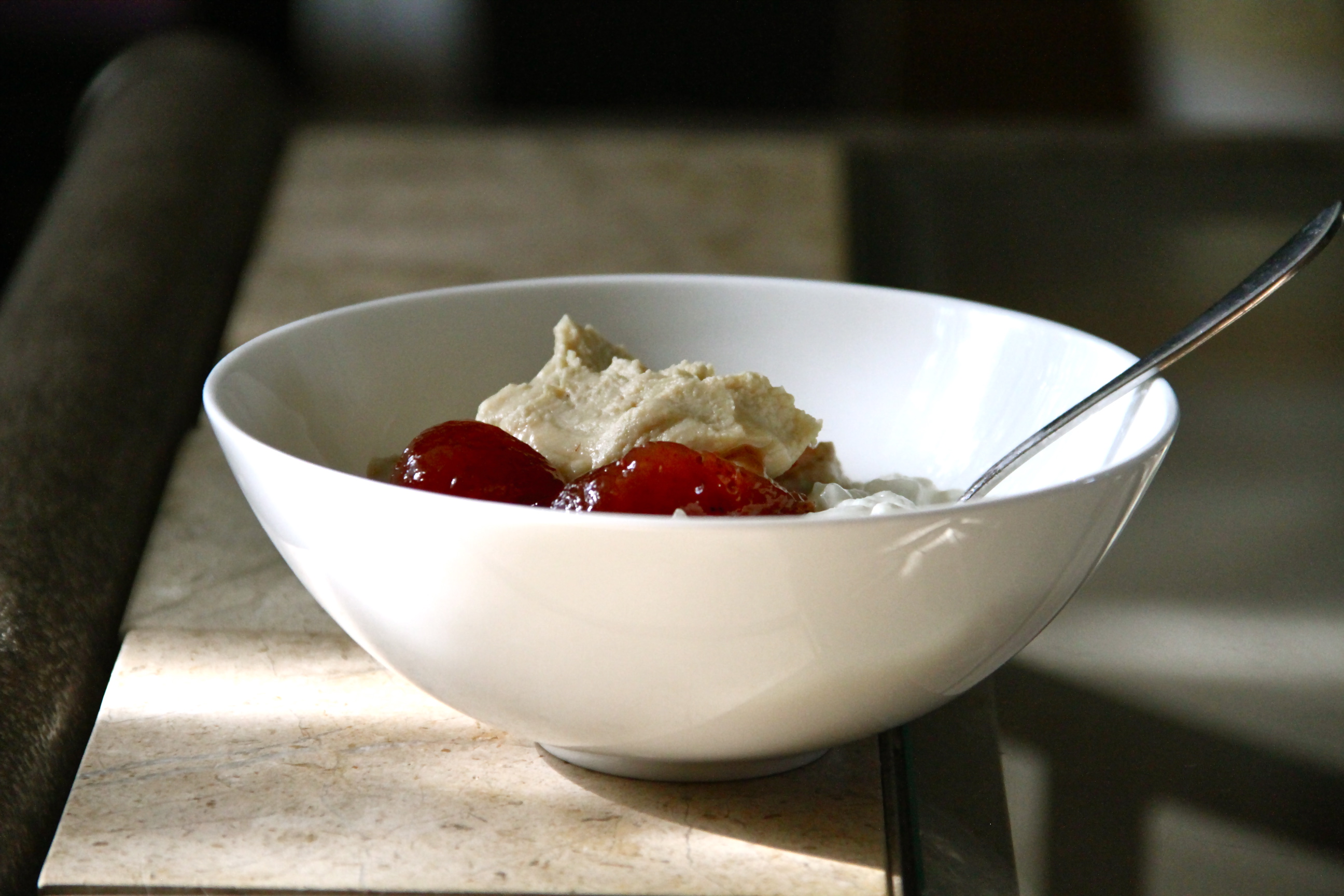 This is… the topic of tomorrow’s post. Care to take a guess as to what’s in the mystery bowl?

I used to be terrified of my hunger, but now I actually get uncomfortable when it’s not around. Hunger is a sign of health and life. Need proof? Let’s take a look at the kind of people who don’t experience hunger:

Which one of those sounds the most appealing? If you picked anything but (d) then I really don’t know what to tell you… other than to encourage you to maybe reconsider your choice because you know those smart people in (d)? The ones who give their body food when it wants it? You know why that’s the most appealing option? Because it leads to:

And who doesn’t want all of the above? I know I do…

How’s your relationship with your hunger? Do you always honor it? Or are you afraid of it?

If you’re afraid of it, why? Do you think your body would tell you it was hungry if it didn’t need the food? And is forcing yourself to deal with hunger really worth it?