Happy [What I Ate] Wednesday, friends! 😀

Confession: today’s WIAW almost didn’t happen… I woke up yesterday morning thinking it was Monday (thank you, long weekend!), and since I only really take pictures of my eats on Tuesdays, I wasn’t going to bother busting out the camera and breakfast almost passed by undocumented. The horror. Thankfully I read Becky’s Treat Yourself Tuesday post before digging in and WIAW was saved 😉

So all that breakfast talk from yesterday left me craving my favourite meal of the day like a crazy person, which would explain why I ended up eating breakfast-type meals all day — one is never enough… 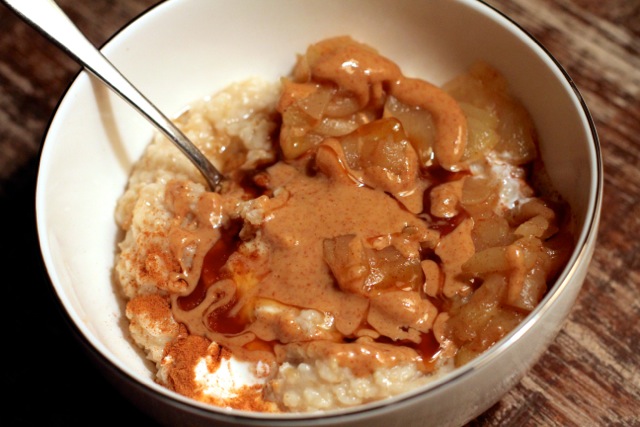 Another WIAW, another bowl of honey almond butter oats. Like I said yesterday… it’s a combo I’ve been crushing on for a long, long time now and it doesn’t really look like it’s going away anytime soon. It’s basically the reason I get out of bed in the morning, and… yeah… that’s really all there is to say about that.

Breakfast for a morning snack… 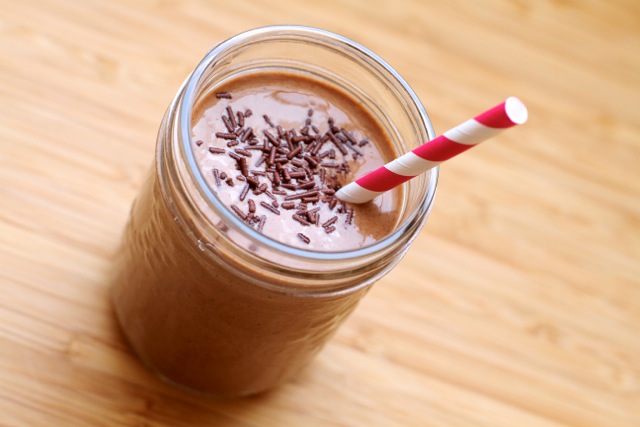 My smoothie addiction is still going strong, and as much as I’ve wanted to try to experiment with new combos, I just can’t seem to break away from my beloved chocolate and almond butter one… hence the recycled picture — it always looks the same, except maybe not as pretty because I don’t usually bother to dress it up. 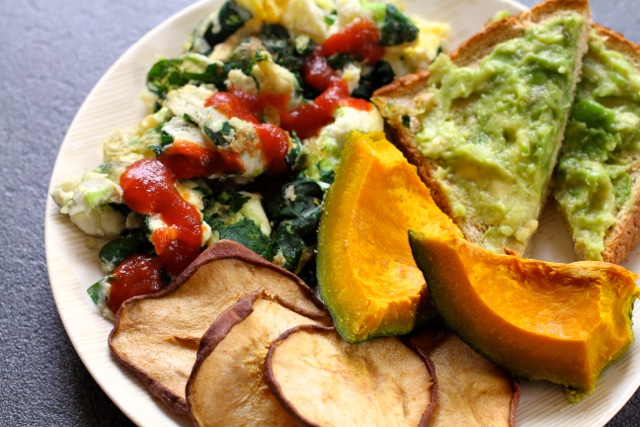 A breakfast-themed snack plate made up of: two scrambled eggs [with spinach and ketchup], mashed avocado and sea salt on toast, roasted kabocha, and dried pears.

A lot of people mentioned eggs as their favourite breakfast in the comments on yesterday’s post, which left me with a huge craving for the little nutritious powerhouses… especially when Alexis reminded me how much I adore the combination of eggs, avocado, and toast. I’m honestly not really sure what my body thinks of eggs since I randomly start breaking out if I eat too many of them, but sometimes I just can’t say no. Had to toss some ketchup in there because eggs need ketchup, and some dried pears because Amanda needs sweetness.

Breakfast for an afternoon snack… 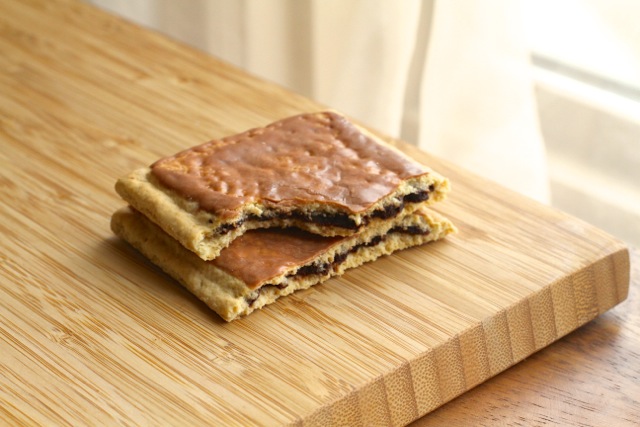 A chocolate Nature’s Path toaster pastry [with a cup of tea].

Did you ever go through a Poptarts phase? A stretch of a few months where you’d eat nothing but a Poptart for breakfast? No? Just me? Well alrighty then. It’s been a good long while since I’ve busted these out first thing in the morning (I was the epitome of health in my late teens 😉 ), but I still enjoy them as a snack every now and again. I just wish we could get the slightly healthier versions up here in Canada! 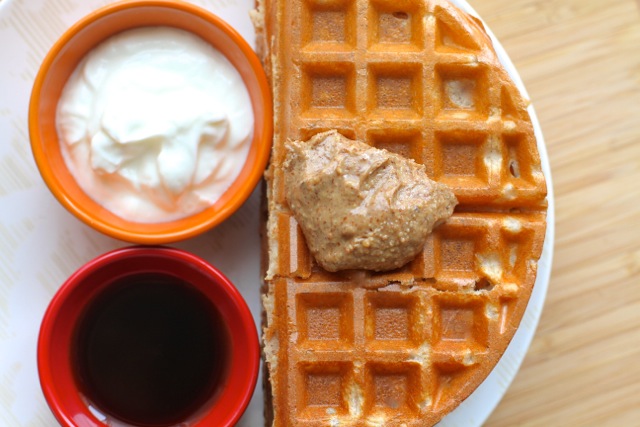 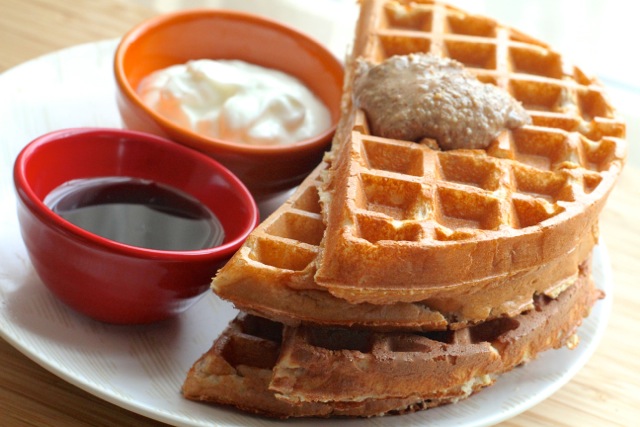 So I was really craving some pancakes, but if you know me then you know I’m not the biggest fan of the pancake-making process — I find the flipping/waiting game to be a little stressful and a test of patience that I don’t necessarily have when it comes to food. I mean, you’re looking at a girl who probably eats 3/4 of her meal before it manages to hit a plate, so having to wait for pancakes to reach the appropriate flippability level is just torture. Thank goodness for no-fuss waffle makers! I wasn’t sure if it would work, but they actually came out really well. Light, fluffy, and slightly crisp on the outside. Winning.

Breakfast for an evening snack… 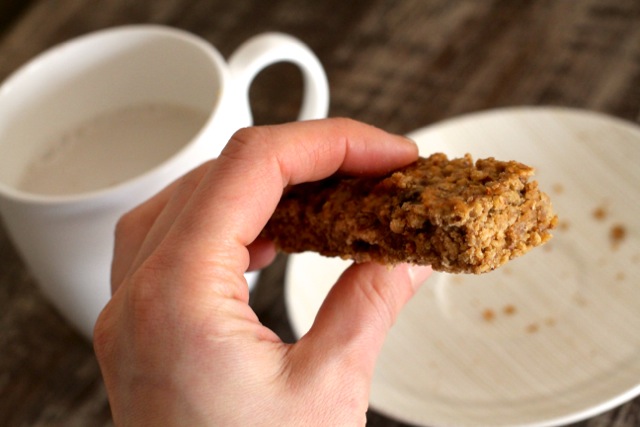 One of my soft & chewy protein granola bars with a cup of warm vanilla almond milk.

You guys… I did it again… I whipped up yet another batch of granola bars. This is, without a doubt, my favourite recipe that I’ve ever posted on Spoons, and also the one I make the most often. Not only are these bars super quick and easy to throw together, but they taste pretty darn fabulous… not that I’m bragging or anything 😉 And I toss the warmed milk in there because… what’s more comforting than a cup of warm milk before bed? Lullaby.

And that’s that — a day entirely made up breakfasty eats, whiiiiich is probably my favourite kind of day. And speaking of favourite days, I’ll see you guys tomorrow for Thinking Out Loud! 😀

Which do you prefer… pancakes or waffles? Usually waffles, but lately… pancakes.
What’s a smoothie combo you love? Chocolate, banana, and AB — but I need new ideas!
Eggs on ketchup – yay or nay? YAY.
Did you ever go through a Poptart phase? What was your favourite flavour? YES. And S’mores.