And because it also happens to be Wednesday, we’re going to be doing it in traditional What I Ate Wednesday style, savvy?

So, you guys have probably noticed that there are a tonne of “rules” surrounding eating these days. Like… a tonne. Just eating doesn’t even seem to be a thing anymore. Now it’s all:

“Eat at this time, not at that time.”

Basically: analyze the heck out of what, when, and how you eat. And while, sure, I do think it’s important to be mindful of our eating habits, I also think it can go [way] too far… to the point where people do feel genuine guilt over breaking “food rules” — like they committed some kind of dietary sin. I mean, heaven forbid that I eat something I’m not “supposed” to, at a time I’m not supposed to eat it.

That’s the surefire path to damnation right there, my friends.

Can you tell I’m not a big fan of the idea? I mean, don’t get me wrong — there was a time where I followed those kinds of rules religiously — but these days? Nuh uh. No way. And I’ll tell you why at the end. First, let’s take a look at my [foodie] confessions…

Confession: my day of eats are never as ‘neat’ as they look on the blog. 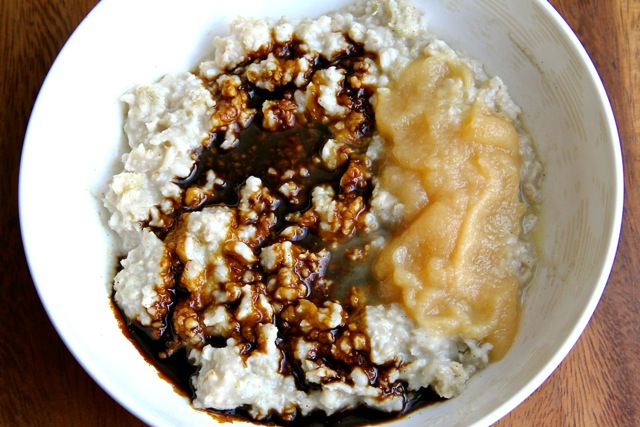 [Breakfast:] 3/4 cup oats cooked in coconut milk with half a scoop of vanilla rice protein powder. Topped with a mix of molasses, maple syrup, and applesauce.

I’ve talked about this once before, but that was mainly concerning the fact that my pictures look a lot nicer than my reality of eating out of pots and standing over the counter. But my eats aren’t usually as structured as they are here, either. I categorize them in a B, S, L, S, D, S kind of way to make it easier, and because that’s kind of how my mind was trained in recovery, but there are days where I’ll eat 4 times a day, and days where I’ll eat 10 times a day. It all depends on my appetite, cravings, activity level, schedule, etc.

Confession: I live for carbs. 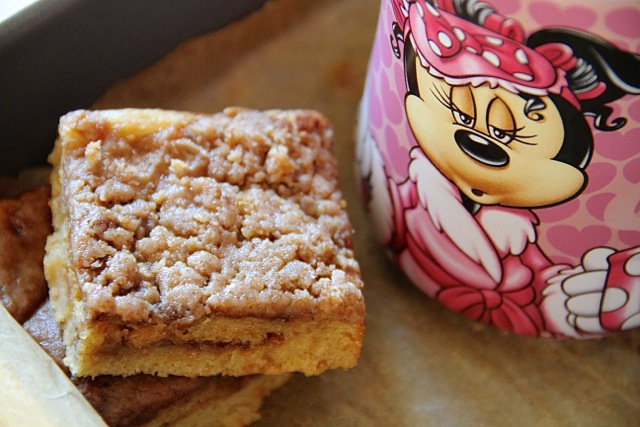 [Morning snack:] coffee with a splash of homemade creamer and a slice of banana coffee cake.

I do. I’ve tried the whole high protein/fat thing on a few different occasions, and my body just isn’t a fan. I get cranky, my stomach goes all wonky, my cravings are out of control, and my energy completely disappears. This girl needs her carbs, and the more she eats, the better she looks and feels.

I realize this isn’t exactly the popular belief of the times, and that it doesn’t necessarily work for everyone, but it’s really been a life changing realization for [me]… and it makes me sad to see carbs getting such a bad rap.

Confession: sometimes it’s just not easy to get the veggies in. 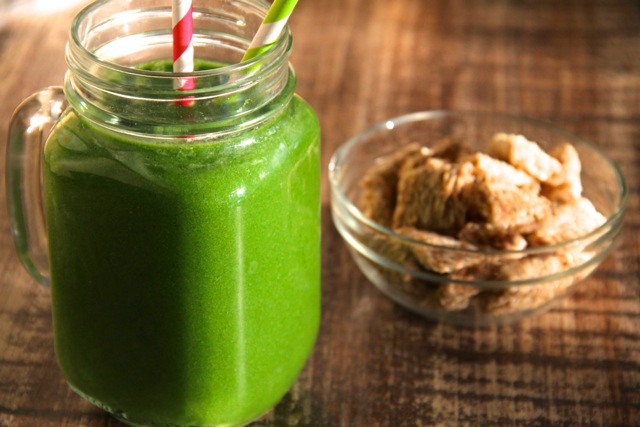 [Lunch:] a green smoothie made with a banana, dates, hemp seeds, and baby spinach, with a bowl of Kashi Cinnamon Harvest to crunch on.

Don’t get me wrong — I love veggies — but there are definitely times where they just don’t sound that appealing. And I really have to watch how many and what kind I eat or my stomach doesn’t hesitate in letting me know that it’s not overly pleased. So I drink them. Err… the green ones, anyways. Green smoothies have been my saving grace, especially since they’re a good excuse to get more sweetness in 😉

Confession: I’ll never give up sugar. 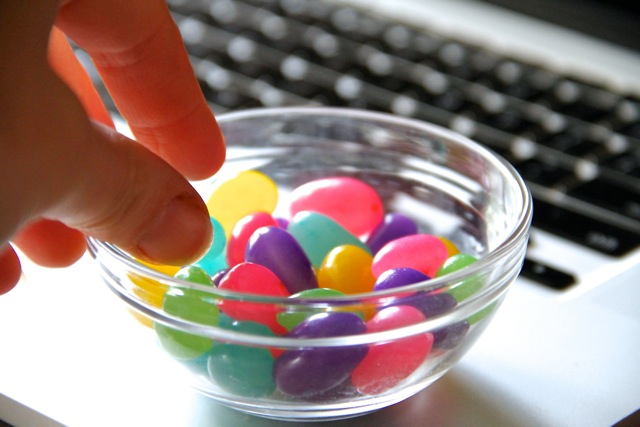 That’s not to say that I go crazy on it, but I don’t demonize it or avoid it like the plague either; and I have some processed form of it pretty much every day. I mean, I love my natural sugars and I’m lucky to often be able to satisfy my sweet tooth with those, but sometimes a girl just needs some jelly beans, ya know? Besides… I didn’t notice any overly impressive benefits when I gave it up, nor did I notice any overly negative effects when I brought it back. And it just makes life that much sweeter… #punny.

Confession: I’ll never be satisfied with 1-2 squares of chocolate. 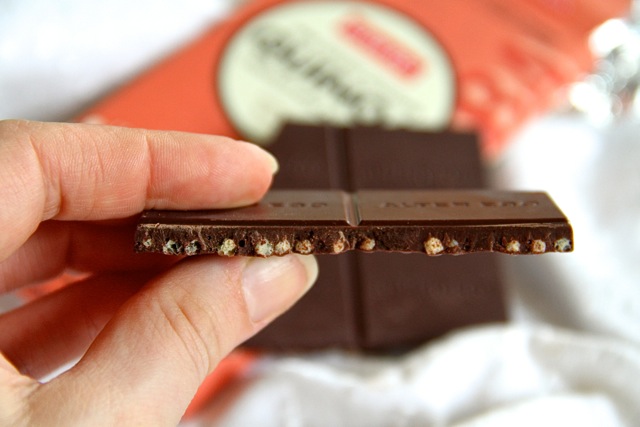 Okay, this one might not be entirely true, since there are definitely times where 1 square after a meal is enough to take the edge off, but for the most part, I don’t usually stop on anything short of half the bar… especially when this bar is involved. Bloggy friends, meet my newest obsession. Newest obsession, bloggy friends. You guys… you need to try this bar if you can get your hands on it. The taste of the chocolate paired with the crunch from the quinoa is just… uunnnnggghh (read: SO good).

Confession: I eat when I’m not hungry. 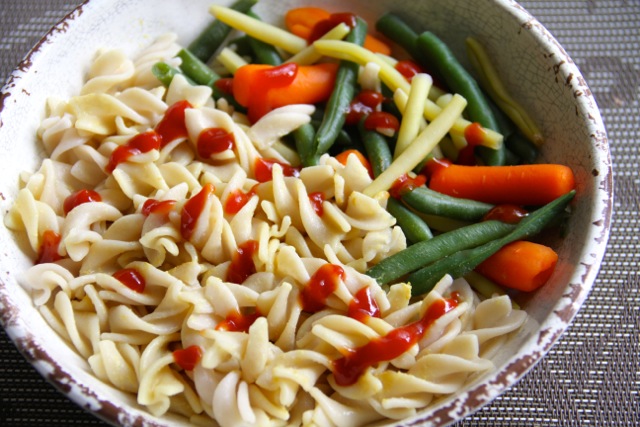 Dinner: whole wheat pasta with a homemade cheesy sauce and green beans on the side. Topped with ketchup, #obviously.

I know, I know… “Eat when you’re hungry, stop when you’re full.” But what about… eat when you have a craving? Or when you’re with family/friends? Or when you’re baking? Or when something just straight up tastes good? There are a lot of times where I’ll grab something (usually sweet) just because I’m craving a taste of it. I know food is fuel, but it’s also a whole heck of a lot more than that, and I don’t think there’s anything wrong with getting enjoyment out of it.

Confession: I never eat without distractions. 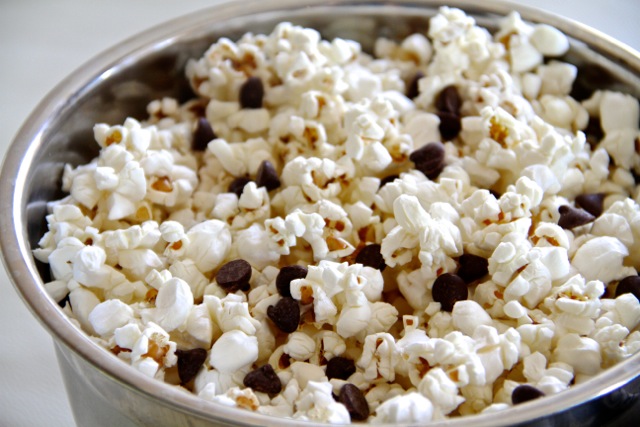 Evening snack: popcorn with chocolate chips while watching the GoT finale.

If I’m eating, there’s a 99.99% chance that I’m either: on the computer, reading a book, watching TV, playing video games, studying, working, blogging, and/or doing something else. I know that’s not exactly ideal when it comes to the whole mindful eating thing but… honestly? I tried phasing out all other distractions and I just found myself rushing through my meals because I was bored and wanted to go do something else. It doesn’t work for me.

So there you have it — my foodie confessions. I realize they go against most dietary “wisdom,” but they work for me. And if they stop working, then I make adjustments. I think one of the worst things we can do for our health is become too rigid in our habits. I mean, our bodies aren’t static things that operate on set principles — they’re fluid and ever-changing, and our habits should be as well. The same things aren’t going to work for different people, and the same things aren’t going to work for the same person at different times. It’s all about being flexible and keeping your sights set on the big picture — not driving yourself crazy with tiny details.

I guess what I’m just trying to say is that it’s okay not to eat “perfectly.”