Would you think less of me if I admitted that a lot of the comments you guys left on my last post made my eyes a bit misty? I hope not, because I seriously teared up. You guys are the best. Honestly. Thank you so much for all the warm welcomes (and welcome backs). It reminds me of one of the things I love most about blogging – being surrounded by amazing people…

… whoooo just so happen to be obsessed with the same things I am.

So I was originally planning on sharing my favorite cookie dough recipe with you guys today, but then I realized it was Wednesday and that I’ve always kind-of, sort-of wanted to do a WIAW post after seeing so many of them pop up around the blog world, so the cookie dough will have to wait.

I don’t know about you guys, but I have this slight fascination with seeing what other people eat. It used to be a way for me to unhealthily compare my own eating habits to those of others, but now it just comes down to plain old curiosity… and a way to pick up some amazing new ideas.

What can I say?

There are some brilliant people out there who come up with some of the most delicious things to eat; things I would probably never come up with on my own. Comparison is bad, as we’re all individuals with individual needs, but inspiration is good, and I’d be lying if I said that the blog world wasn’t a constant source of inspiration for me. So without further ado…

Breakfast is, without a doubt, my favorite meal of the day, and I always, always, 99.99% of the time wake up ready to chew off my own arm, so it needs to be epic. And this morning it definitely was… 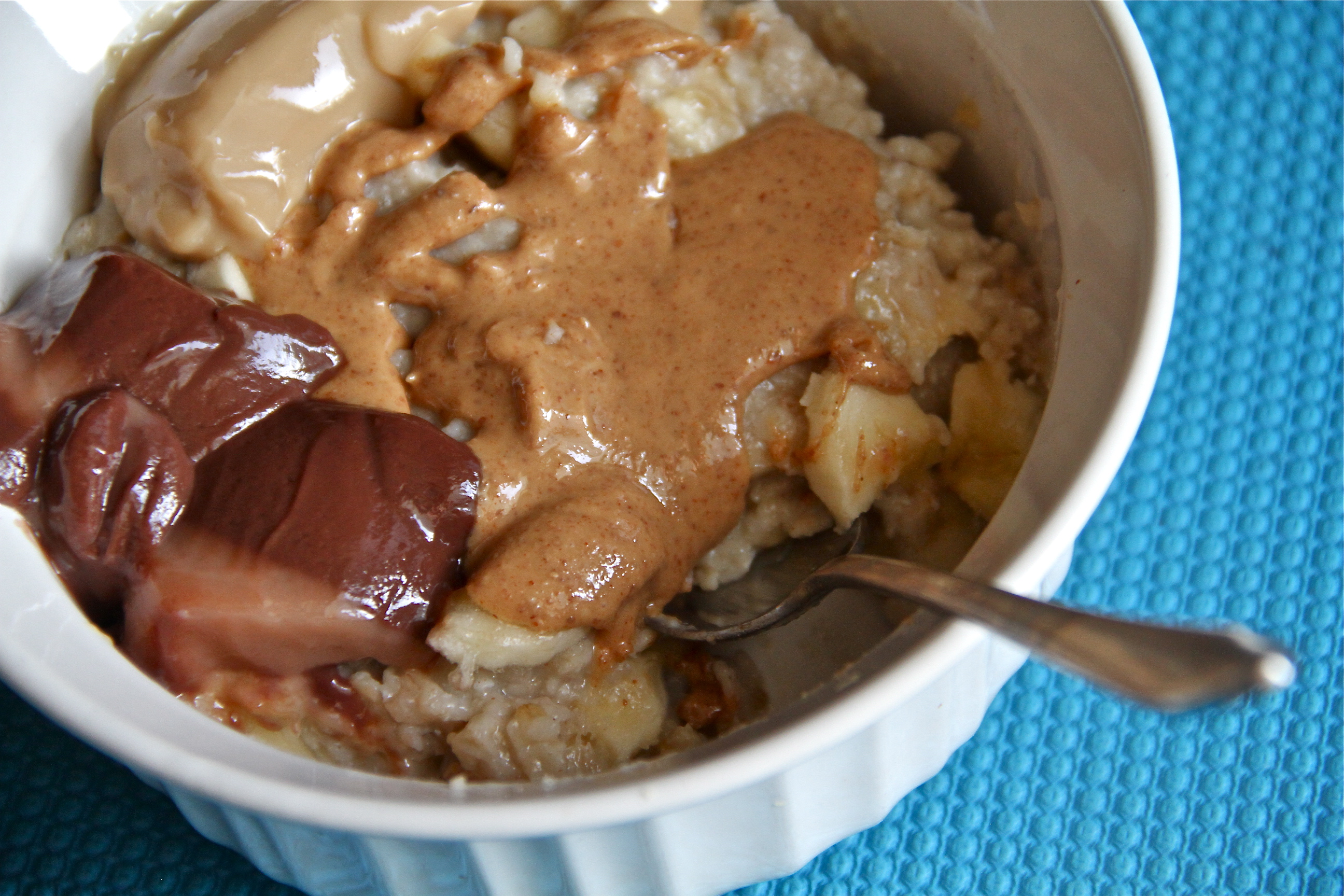 Dessert for breakfast? Please and thank you. Dee-molished while catching up on my favorite blogs.

After letting my belly digest that for a bit, I decided to brave the blow-your-head-off wind and headed outside for a run. It was… not the best. I really hate running in the wind, and today was especially bad. I managed 3 miles in 30 minutes, but didn’t enjoy it as much as I would have liked. Boo.

After stretching out a sore hamstring (why is it that only ONE hurts?), I needed a little something to hold me over until lunch so I broke out one of my chocolate chip cookie dough protein balls… 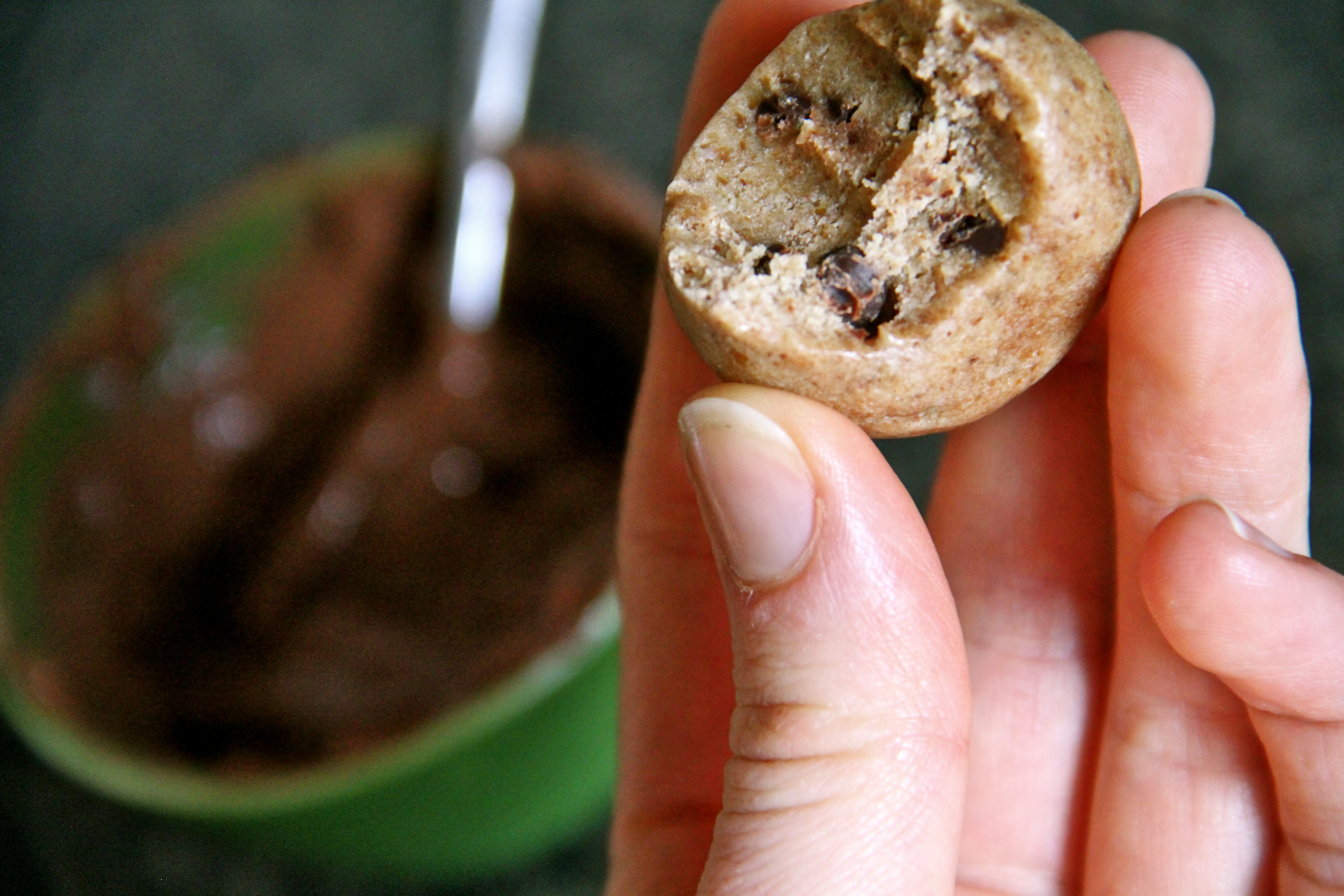 … and enjoyed it with… what’s that in the background? A rather random concoction I came up with one day. What you do is take: 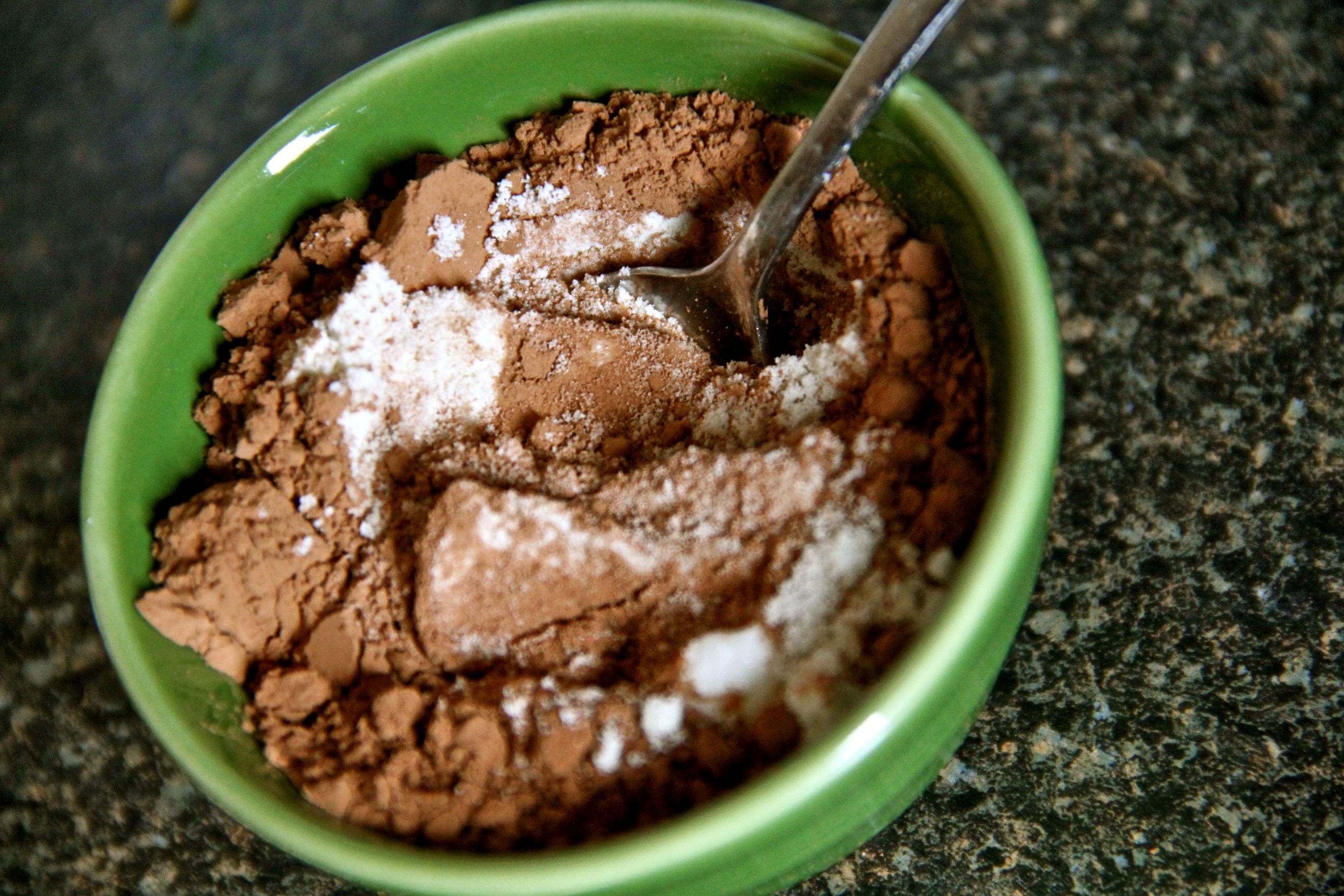 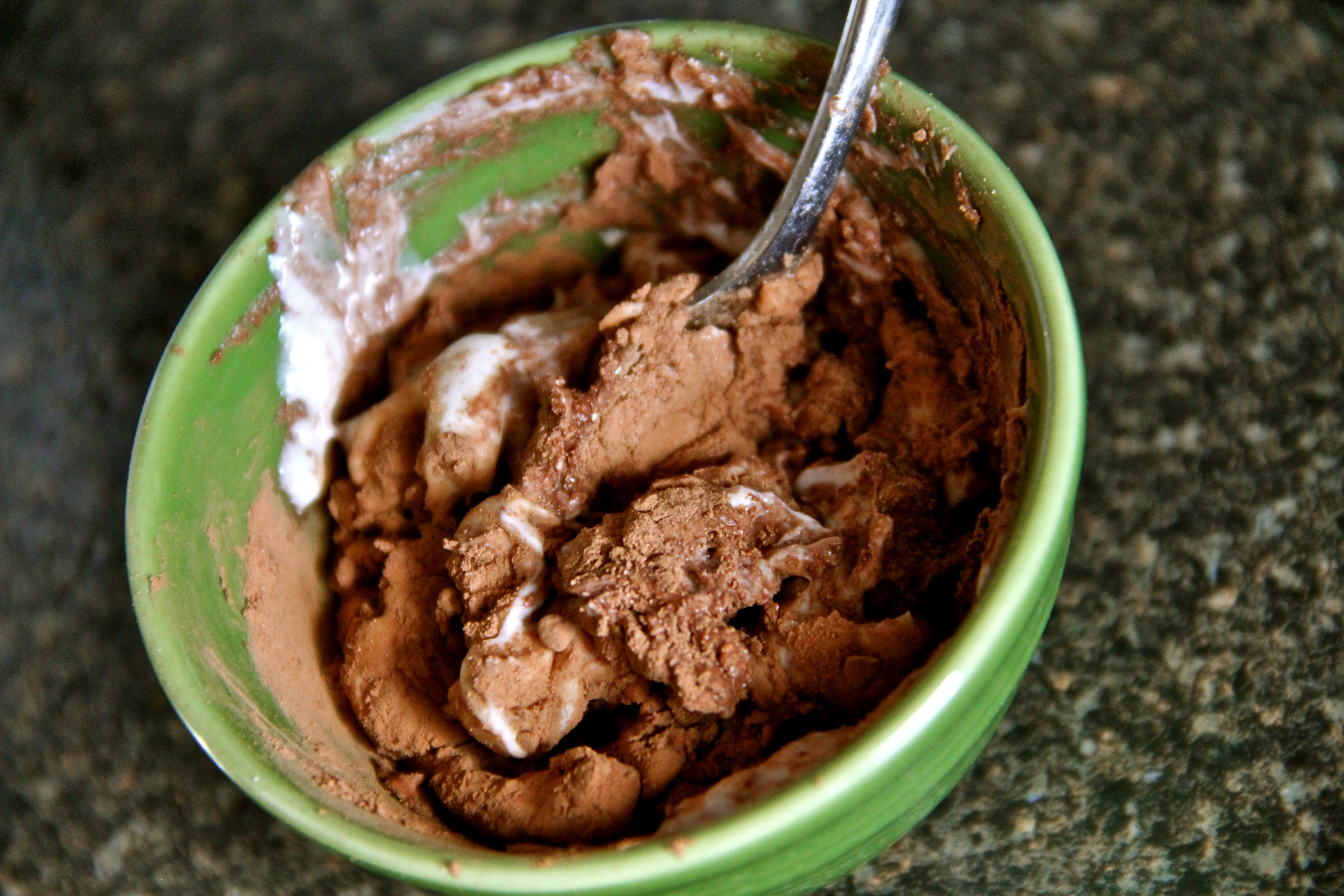 What you end up with is something similar to cake batter in texture, with a tangy, sweet, chocolatey taste. Almost like chocolate cheesecake? Or, a healthy imitation of it, anyways 😉 But cut me some slack; I wasn’t about to break out the cheesecake at 10 in the morning… 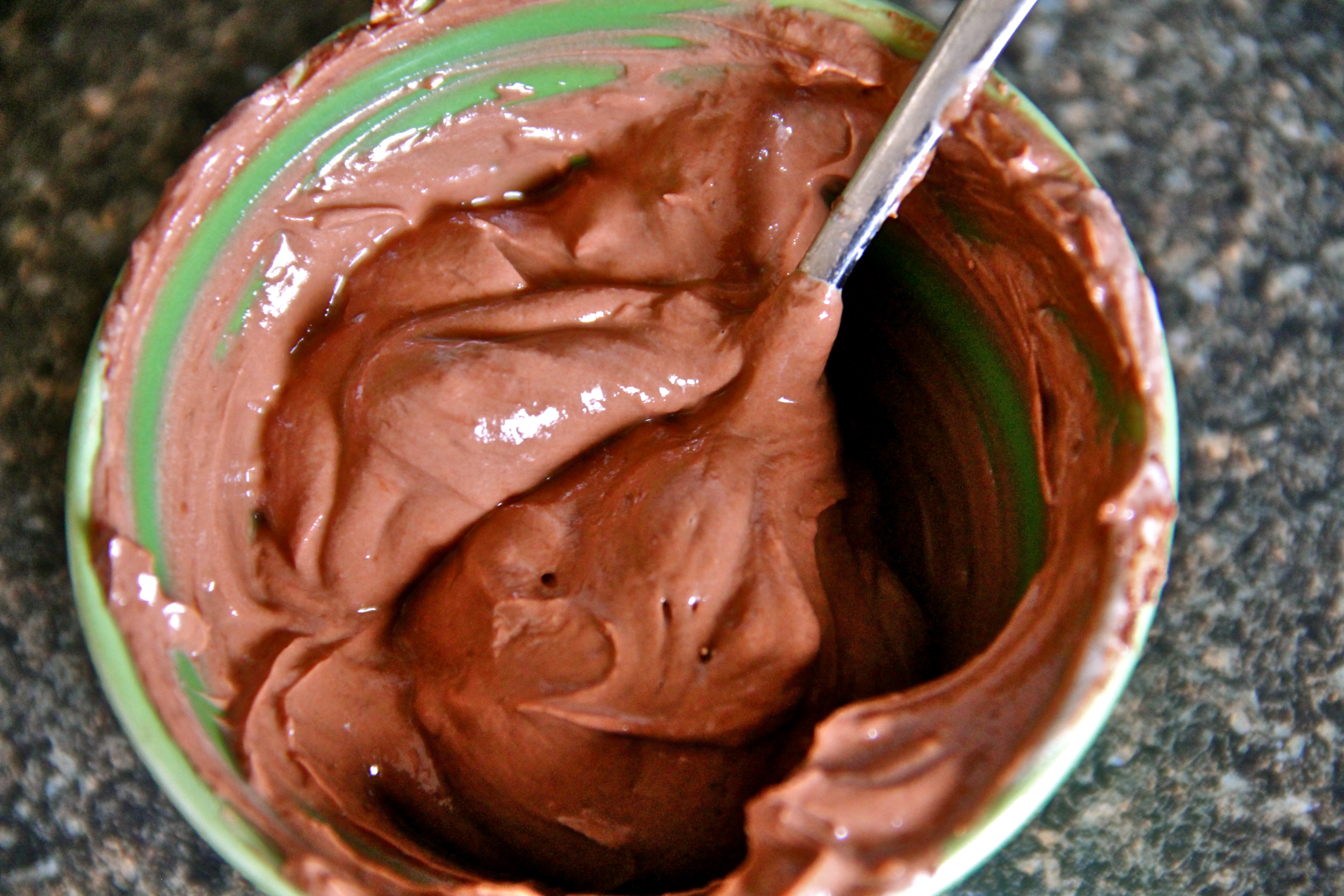 That [just barely] held me over until lunch time, at which point I began craving… breakfast. I should probably warn you now that I have no qualms with eating breakfast for lunch/dinner, and do so quite regularly. Hey, if it ain’t broke, fix up a breakfast bake… and so I did 😀 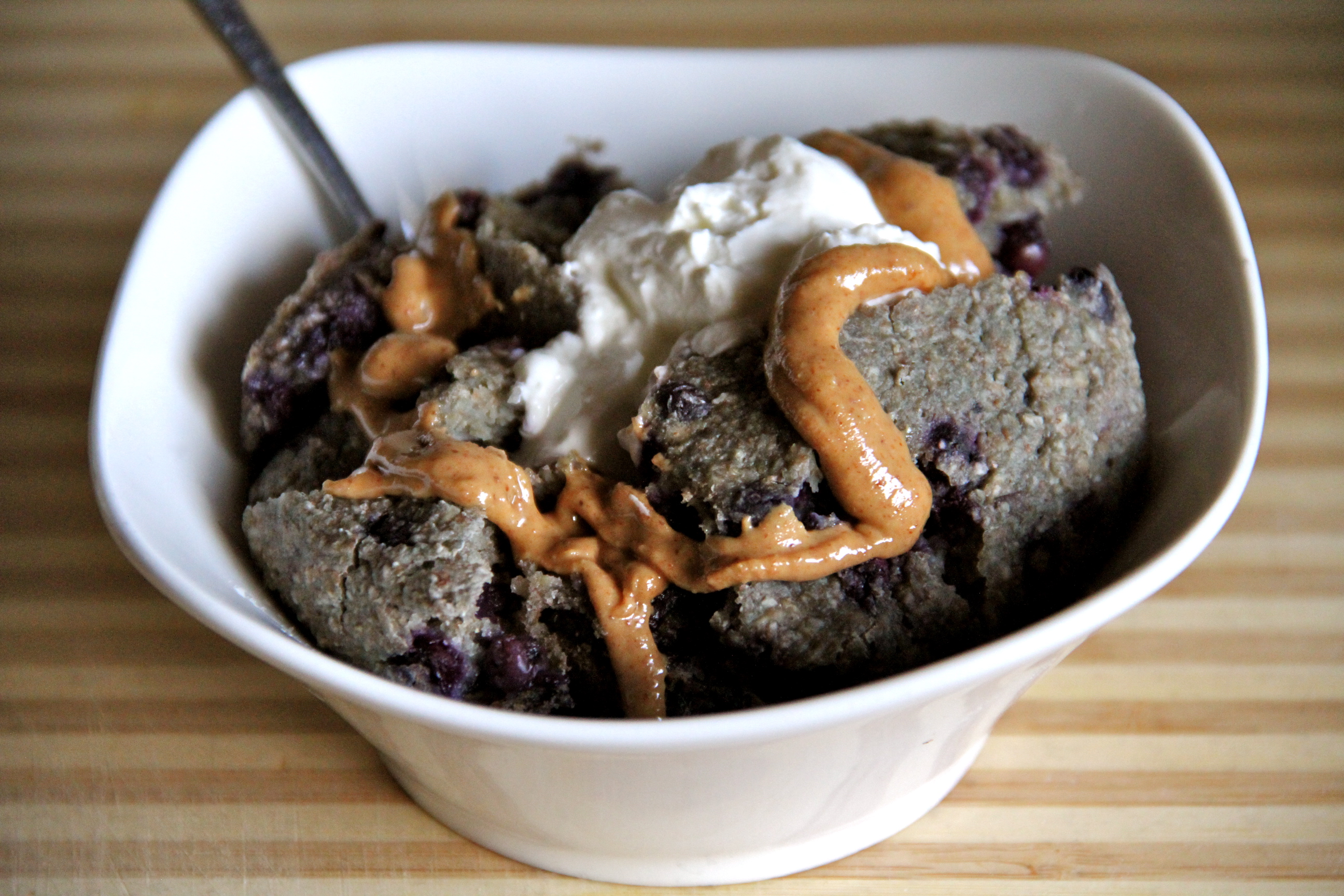 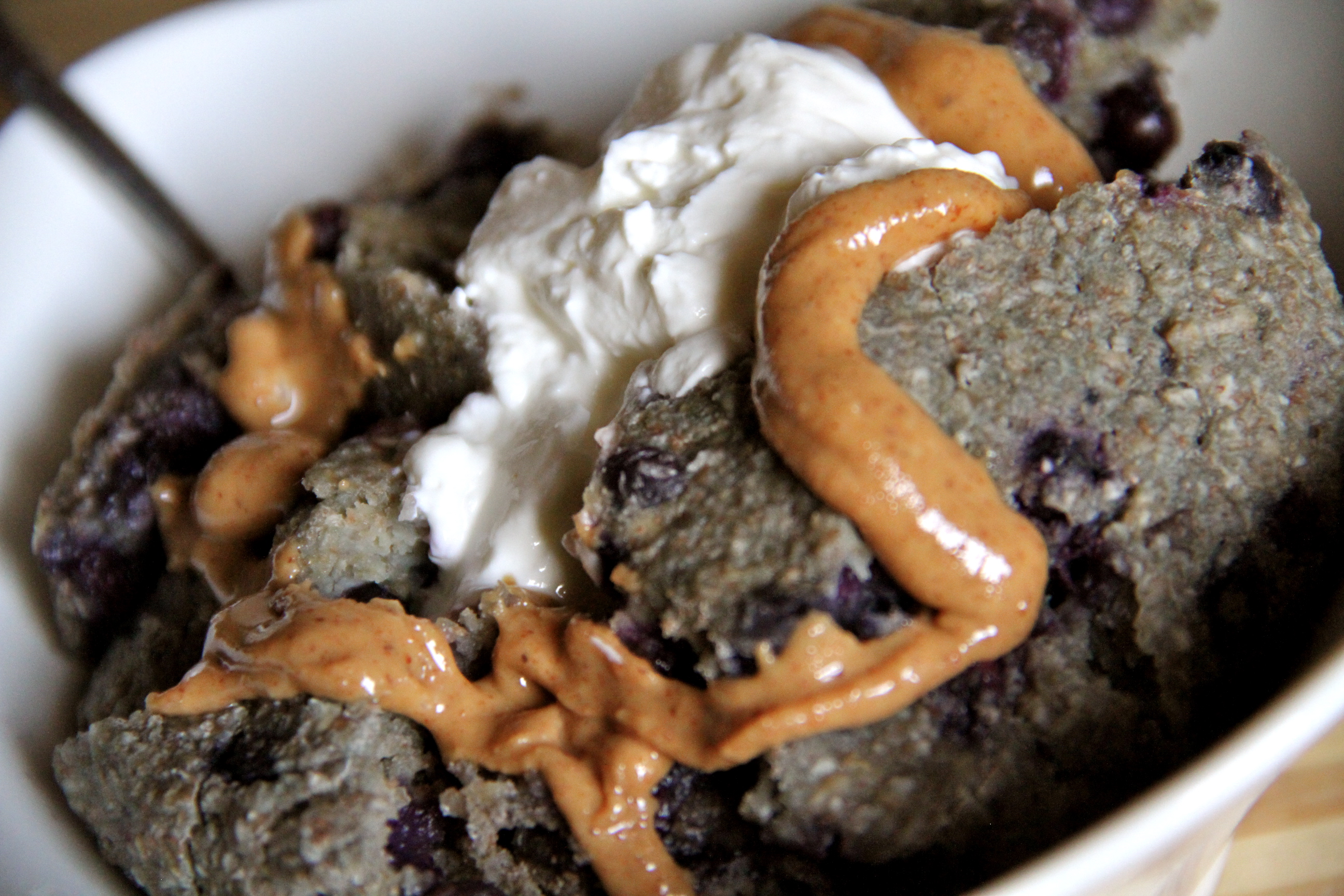 I whipped up a blueberry muffin breakfast bake from a recipe loosely adapted from Jess, topped it with cream cheese and almond butter (I couldn’t decide!), and enjoyed it alongside my daily salad beast. 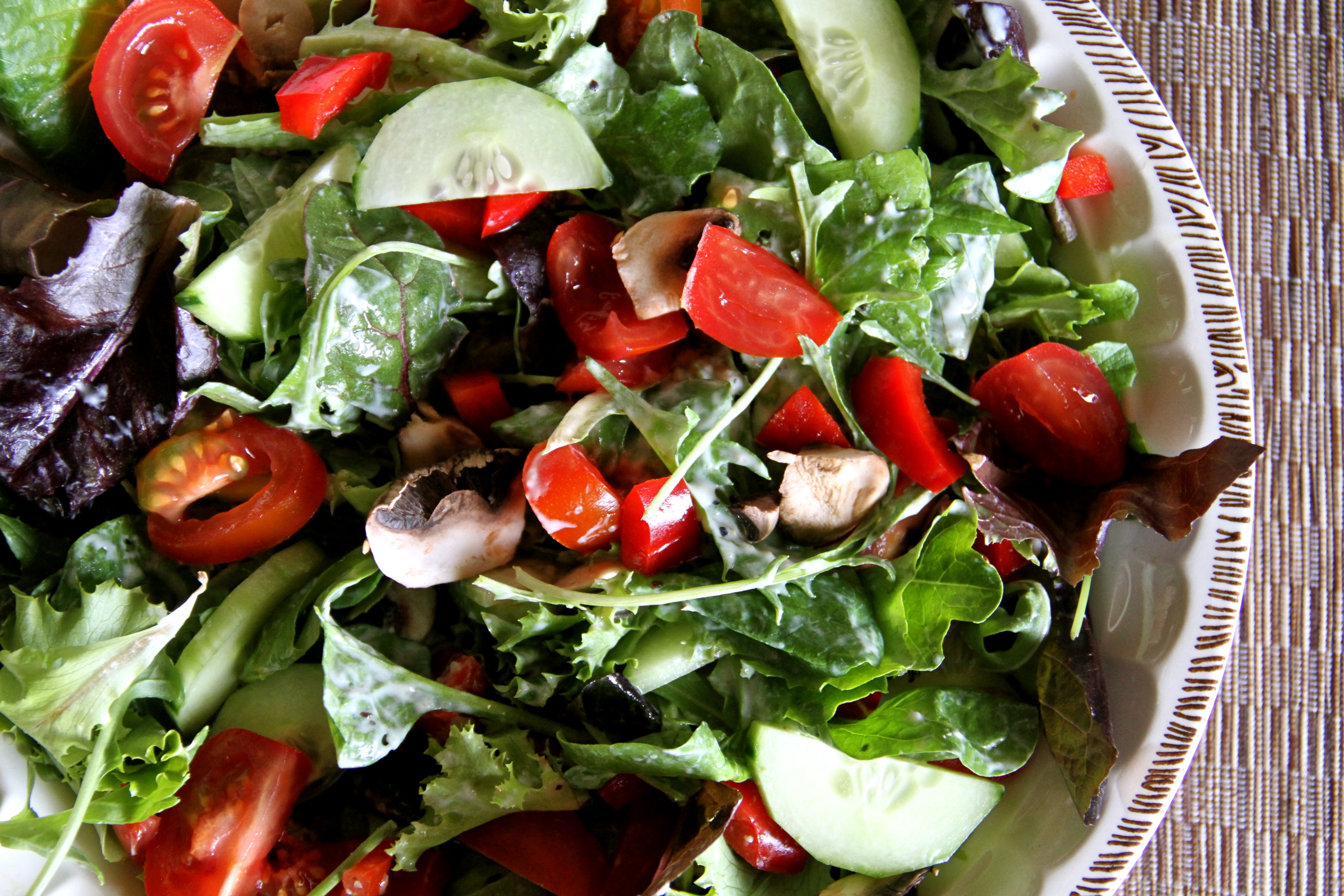 Why, oh why, did this lunch have to end? Oh yeah, so I could go on to get some actual work done and eventually enjoy a delicious afternoon snack while browsing through a few magazines. 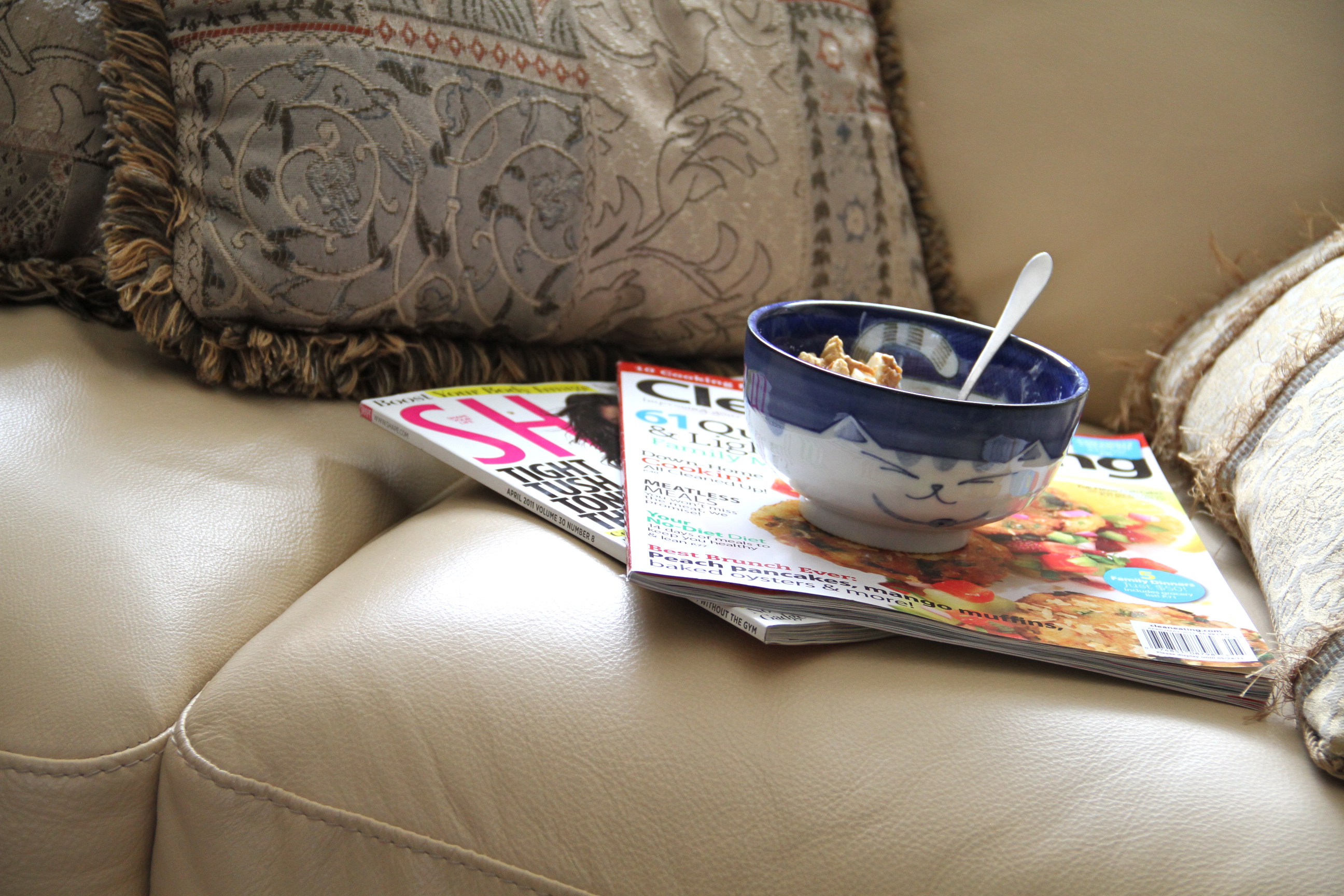 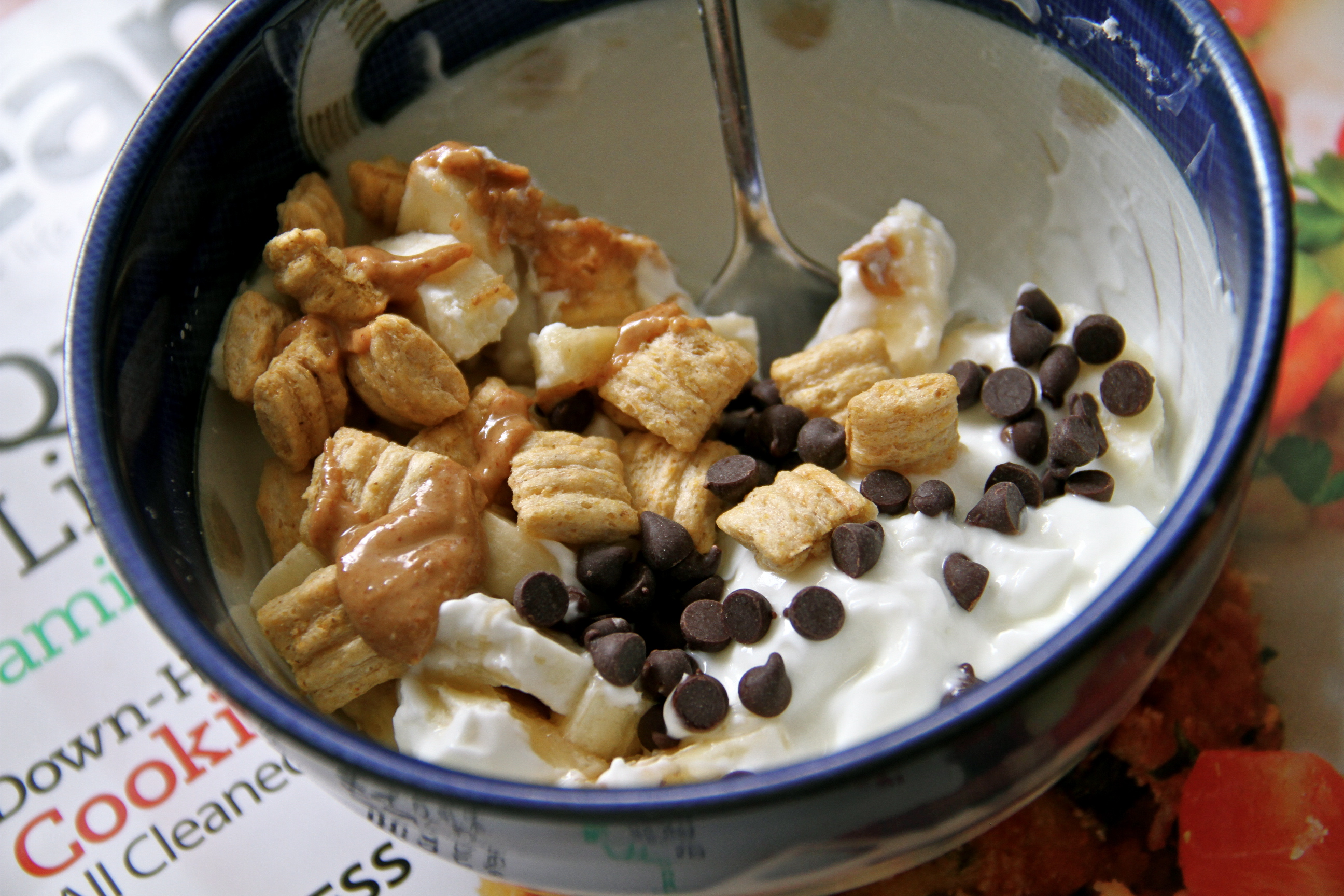 And now I’m sitting here, putting the finishing touches on this post and dinner… 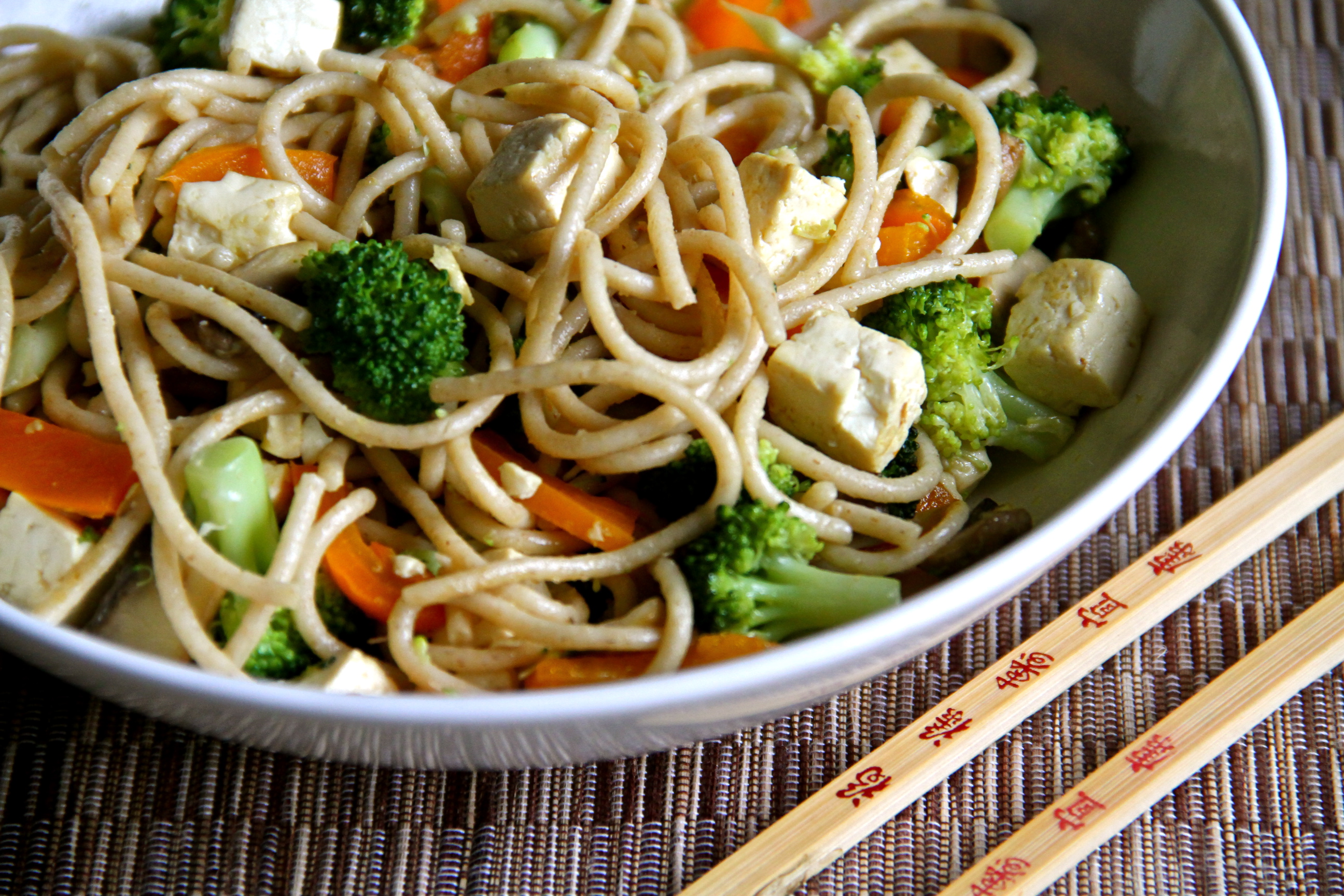 Gah. It takes a tonne of time to post everything I eat, and it would probably take a lot longer if I included all the things I randomly pick at throughout the course of the day. That being the case, it’s something I probably won’t do too often, but I just wanted to give you guys a general idea of how and what I eat.

I’ve still got one more snack to go (canNOT sleep on an empty stomach) before calling it a day, but until then, I think I’ll go veg out on the couch and pop in an old season of Gossip  Girl.

Much love until tomorrow <3

Best thing you ate today? If I had kids, this would be like asking me which one is my favorite. But I’m gonna have to go with Little TImmy (breakfast bake), because it managed to hit the spot just right.

Favorite breakfast food to have for dinner? Crepes. Or pancakes. Or… oatmeal?